My two boys are ages six and eight and honestly it seems like half the time they don’t listen to a thing I say. 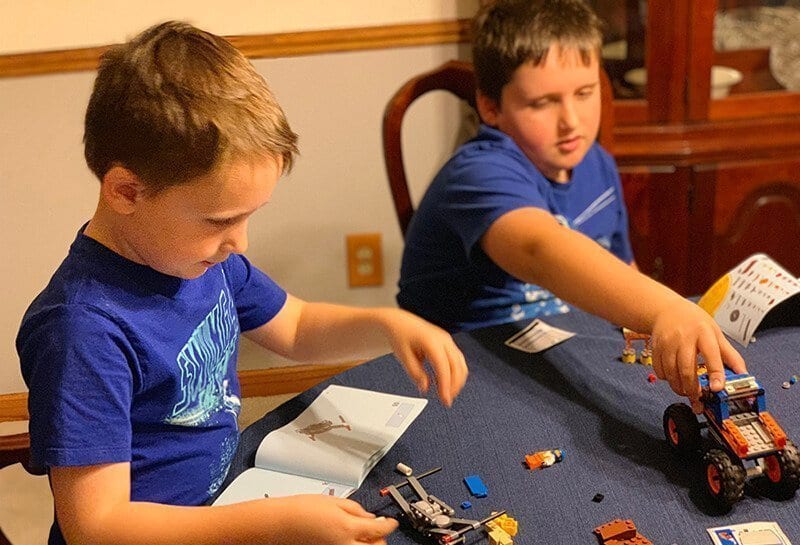 This is them, playing with Legos, one of their favorite things to do together.  On the night of this story, we had just finished a Boy Scout meeting that had gone a little longer than usual. It was dark, and cold outside and the boys were tired. They weren’t very talkative on our quick drive home.

We  pulled in the garage, I stopped the car and picked up my phone. “I just have to call my friend Cheryl real quick.” She and I needed to discuss plans for a charity event we were holding this coming Friday at the school. The event helps children in need have a Merry Christmas. Families can join us and bring items to fill shoeboxes for these kids in poverty living all over the world. It’s called Operation Christmas Child and I was excited to help with one of the area volunteer sites.

My call with Cheryl was quick. I was surprised the boys had stuck around with me in the van to hear my call. When it ended I said “ok boys let’s get inside and get ready for bed.” I got out of the van and headed into the house but soon realized only one son was following me.

My oldest son was still standing in the garage…. crying by the van. Surprised I dropped my things and quickly walked back to him. “Sweetheart what is it? Are you ok?” He wouldn’t tell me. Too choked up to talk.

Finally after about a minute or so of coaxing he said “mom I don’t need Cousin anymore. I want to donate him.” Cousin is a special stuffed animal he has had since he was about 6-months old. To call it a favorite would be an understatement – this inanimate object was his best buddy. Through tears he said “some other little boy can have him.”

I started crying. How beautiful was this little boys heart?

How full of love and compassion. I was absorbed in the moment so I didn’t notice his little brother who had snuck up to his own room to grab a stuffed animal to give away. He returned and started bawling and demanding I give away his beloved stuffed animal too.

I hugged them both long and hard – all of us blubbering together.

What I learned through this is that it’s the little things we do and say, when we don’t even think our kids are listening, that make the biggest impact and allow them to have their biggest revelations.